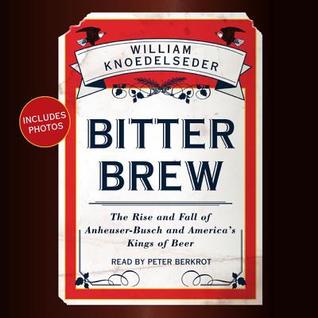 Goodreads Synopsis:
The engrossing, often scandalous saga of one of the wealthiest, longest-lasting, and most colorful family dynasties in the history of American commerce—a cautionary tale about prosperity, profligacy, hubris, and the blessings and dark consequences of success.

From countless bar signs, stadium scoreboards, magazine ads, TV commercials, and roadside billboards, the name Budweiser has been burned into the American consciousness as the “King of Beers.” Over a span of more than a century, the company behind it, Anheuser-Busch, has attained legendary status. A jewel of the American Industrial Revolution, in the hands of its founders—the sometimes reckless and always boisterous Busch family of St. Louis, Missouri—it grew into one of the most fearsome marketing machines in modern times. In Bitter Brew, critically acclaimed journalist Knoedelseder paints a fascinating portrait of immense wealth and power accompanied by a barrelful of scandal, heartbreak, tragedy, and untimely death.

This engrossing, vivid narrative captures the Busch saga through five generations. At the same time, it weaves a broader story of American progress and decline over the past 150 years. It’s a cautionary tale of prosperity, hubris, and loss.

My Review:
I’m not a big Budweiser fan; they have some good lighter options, but when I want to really enjoy a beer I go for something else. After reading Bitter Brew, I have a whole new appreciation for Budweiser as a company and a part of American history. Granted, this new appreciation won’t change my taste buds’ preferences.

Bitter Brew offers a comprehensive history of the company and how the brewing industry changed towns like St. Louis and Milwaukee. Knoedelseder weaves the different threads of company and American history together very well, shifting effortlessly from Prohibition politics to a vignette of the brewery. Competitors are vilified and humanized for their differing approaches to creating a product. The Schlitz downfall is handled particularly well.

Knoedelseder really shines depicting the family and their relationships with each other. At times, this book comes across as a soap opera – drugs, murder, madness! There are some heartbreaking descriptions of broken father/son bonds. The company’s descent is charted through the family lines. Even though you know how this will end, the family’s history compels you to keep reading.

One thought on “Go Read This! | Bitter Brew: The Rise and Fall of Anheuser-Busch and America’s Kings of Beer by William Knoedelseder”